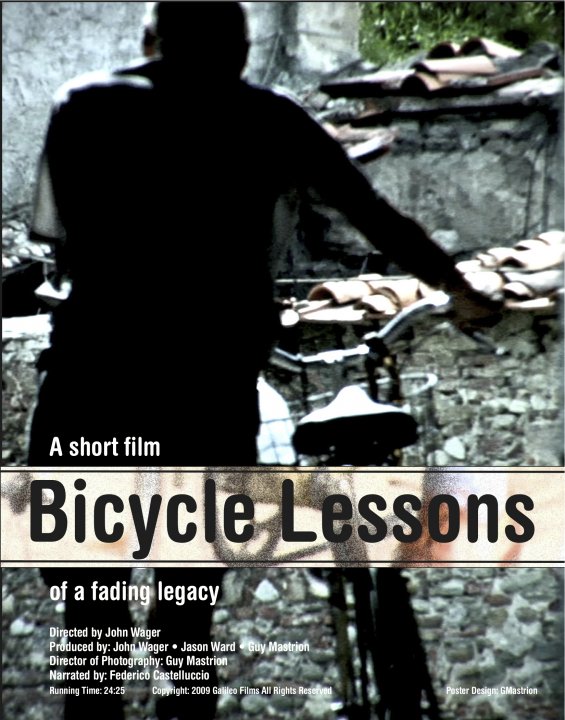 A short documentary film about American and Italian WW 2 veterans.

Bicycle Lessons is a short film about American and Italian veterans of World War 2.

Two Italian and two American veterans relate intimate stories of capture and escape at the hands of Nazi’s and Fascist’s during WW II in Italy. Through deep personal reflection we learn of hard lessons and experiences that are chillingly relevant today. Fabio Ricci, (Italian) takes us back to his Tuscan village to show us how he hid under an artichoke plant to escape capture by the Germans. Fabio is articulate, intelligent and kind and gives poignant insight into how the war shaped life in Italy and changed the world. Floyd Duams, (American) survived three European invasions, only to be captured in Italy, then escape from Cine Citta’ the Italian movie lot – prison camp. Floyd gives a glimpse of life with the Italian underground. Pio Pieruccini, (Italian) refused to fight with the Nazi’s once Italy joined the Allied forces, tells of his capture, and how while in prison camp, forced to work making bombs, he is the victim of a bombing himself, losing use of his left hand.

This film took festival honors at a number of shows including the Military Film Festival in Washington D.C. and was one of the main stage screenings. It was also optioned by the Military Channel and aired in honor of veterans day 2010. IMDb https://www.imdb.com/title/tt1639356/