The show is about 45 minutes in length, during which we touch on a range of topics from idea development to execution and agency culture too. I hope you enjoy it. Click here for the show.

Long before social media, there were photojournalists whose work was shared across traditional media channels. The right instincts, in the right moment, resulted in an image that captured the imagination, documented an event and told a story. A single image seen across all media channels. In today’s more media savvy environment, we might say it went viral. A single moment, a single image and a single opportunity to capture that image. Guts, instinct, talent, intuition, anticipation and a passion for the story; these are a few of the key ingredients for a successful photojournalist.

In 1991 my friend and great talent Ira Yoffe, then VP Creative Director at Parade Magazine, invited me to participate in the Eddie Adams Workshop. In 2017 The Eddie Adams Workshop celebrated 30 years of its unique program for photojournalists. This is an intense, four-day gathering of top photography professionals, along with 100 carefully selected students. The workshop is tuition-free, and the students are chosen based on the merit of their portfolios. Nikon has been the workshop’s major sponsor since its inception. I’ve been shooting with Nikon Cameras and lenses most of my life. There is an extraordinary relationship between Nikon and The Eddie Adams Workshop, so I try to support Nikon when I can. I still use many of my original Nikon manual focus lenses for both still and video work, even on other cameras. It’s time-proven quality and in the moment, reliability is key.

During the workshop, I was part of the guest faculty sharing my experience and perspective with these young photojournalists. Also on the faculty was the great Duane Michals, among many other celebrated and talented creatives and editors. I don’t recall exactly what Duane Michals had to say to them, but one can imagine it included trusting their creative instincts. My message to these young professionals was simple. For the rest of their lives they would have two jobs; making the work and promoting the work.

It is the same for brands; make the brand and promote the brand. Photojournalists make great hires to help execute social media campaigns. Social media is a ready-made channel for photojournalists. When aligned to your brand story and the goals you would like to achieve, the skills of a photojournalist are hard to beat. One result: the work will come from a more authentic, investigative place as opposed to some very prescribed idea of your brand. Social media immediacy and authenticity is lost when content becomes an entirely mechanical unfolding of the campaign. To me, social media is most successful when it balances the organic with the highly orchestrated.

When considering how to hire for successful social media, think outside the traditional agency box.

When I first started working in the industry, I had a great experience, or I should say, set of experiences, that really enhanced my technical and artistic understanding of film and photography and storytelling in general.

I was fresh out of Parsons School of Design and met my friend Kevin O’Callaghan. Kevin is now a prominent instructor at the School of Visual Arts and an industry legend, not only for his excellence as an instructor, but also for his amazing work in 3D illustration, sculpture and art installations. Kevin is what he has always been, a creative genius.

With Kevin I began working creating props and special effects for film and TV. Together we worked on a number of projects, some in conjunction with Dale Malley, at the time one of the country’s leading independent prop makers.

We worked on television spots for Atari, making 3D live-action TV sets that played video games with each other. We crafted giant ice cubes, a giant glass and a giant can for 7Up and built colorful, moving props for BonJour Jeans. We made props for the Rodney Dangerfield film Easy Money and recreated aspects of the Oval office for a film about JF Kennedy with Martin Sheen; we made props for a Mid-Summer Night’s Sex Comedy with Woody Allen, the Flamingo Scooter for the Flamingo Kid with Matt Dillon…the list goes on. 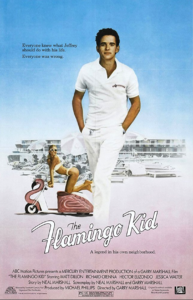 Everything we built, no matter how fantastic, needed to fool the eye, to be real…enough. We had to be convincing in our execution of these props and effects. Some were incredibly authentic to original objects we had been asked to reproduce, others were pure fantasy writ large. This was fun, exciting and interesting work during which I learned a great deal about what the camera will see, or more specifically, what we see and what looks convincing on film. The understanding of how light interacts with various colors, surfaces and structures remain invaluable. The most important aspect of course is that all these aspects are delivering on the intention of the scene and the film as a whole.

The demand for video content and the need to tell brand stories in interesting ways requires first and foremost a great insightful story and then the ability to tell it effectively.

Photography and film is a science of both light and time, the manipulation of these fundamental elements can make or break a piece of content. It’s about what you are filming and how you film it. Where you place the camera and how you light the subject are two of the most important decisions that need to be made.

From my perspective (pun intended), not enough thought and creativity is put into this aspect of video content creation. There is a great deal of stylistic sameness; the industry repeating itself.  This works against the differentiation of your brand. The execution of the story should be anchored in the uniqueness of your brand story, not in the latest trend or enabling technology. If you’ve ever watched a video and the production techniques end up being more interesting than the story, you understand the problem.

If the idea is not crystal clear and interesting, then all the slick execution in the world will not make it better.